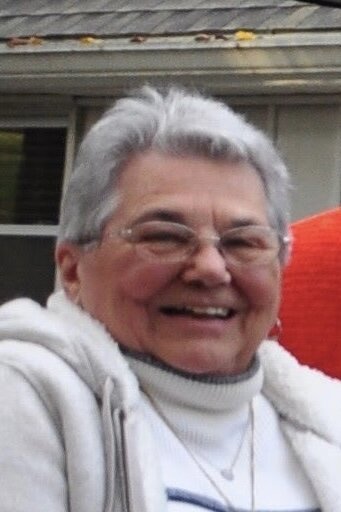 Jane Lezott (nee DeFabio) 89 of Haledon, NJ passed on Thursday, July 14, 2022.  She was born in Paterson, NJ and has lived in Haledon most of her life.  She worked at William Paterson University as a cashier and waitress at the Student Center.  She was a favorite of many of the professors and students. She was a parishioner of St. Paul's R.C. Church in Prospect Park, NJ and a member of St. Paul's Seniors.  Beloved wife of the late Arthur Lezott.  Devoted mother of Robyn Lezott Giampino and her late husband Robert, Randy Lezott and his wife Kellie, Ricky Lezott and his wife JoAnn and Ron Lezott and his wife Michele.  She is also survived by ten grandchildren and thirteen great grandchildren.  She was predeceased by her grandson, Travis, her brother, Anthony DeFabio and her sister Lilian Hunziker.  Funeral from DeLuccia-Lozito Funeral Hoome, 265 Belmont Avenue, Haledon, NJ on Friday at 9 AM.  Funeral Liturgy at St. Paul's R.C. Church, 286 Haledon Avenue, Prospect Park, NJ at 10 AM.  Interment,Christ The King Cemetery, Franklin Lakes, NJ.  Visiting on Thursday from 5-9 PM.

Share Your Memory of
Jane
Upload Your Memory View All Memories
Be the first to upload a memory!
Share A Memory